Let me just start off by saying this was the most fun I’ve ever had in a tournament in my life, and I’ve been playing in tournaments of one form or another since ’96.

With that out of the way, let’s dive into the games: 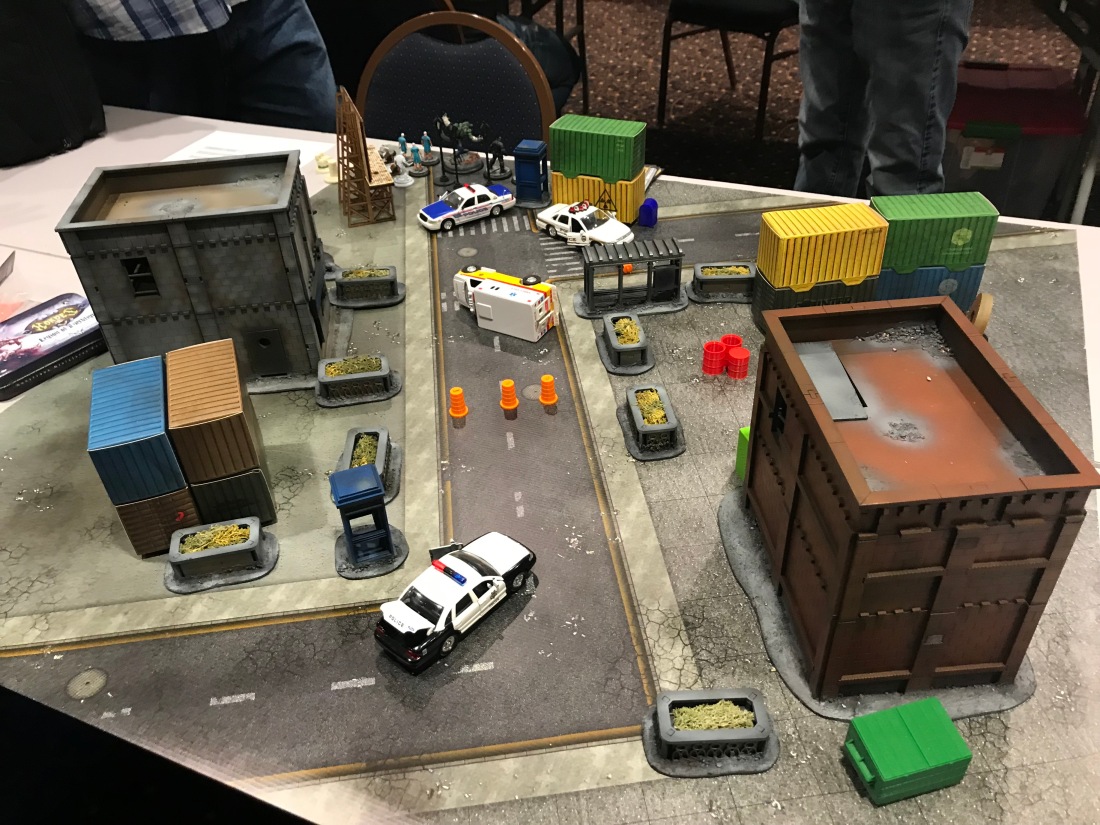 Since Chris was running Joker, I knew my double disarray list wasn’t a great drop, so I ended up running Ra’s/Deathstroke/Merlyn murderball. I went  with double Fast Advance, and Chris deploys first on a hard refused flank. I deploy the majority of my crew to hit his head on, with only Deathstroke running up the empty side of the board. Chris is always a wonderful opponent, and we had a lot of fun kicking off the tournament together, although we were both playing a little slow so we only end up getting through 3 turns. I end up losing HSH, but kill Harley and a number of henchmen in return. My Fast Advances combined with Looting’s objective deployment put me on top of objectives turn 1, so this one ends up a Major Victory, 22-2. I end up killing 124 points of models, almost all with Ra’s, which will be a consistent trend over the course of the day.

Highlight of the game is Ra’s on Titan Dose killing Harley. 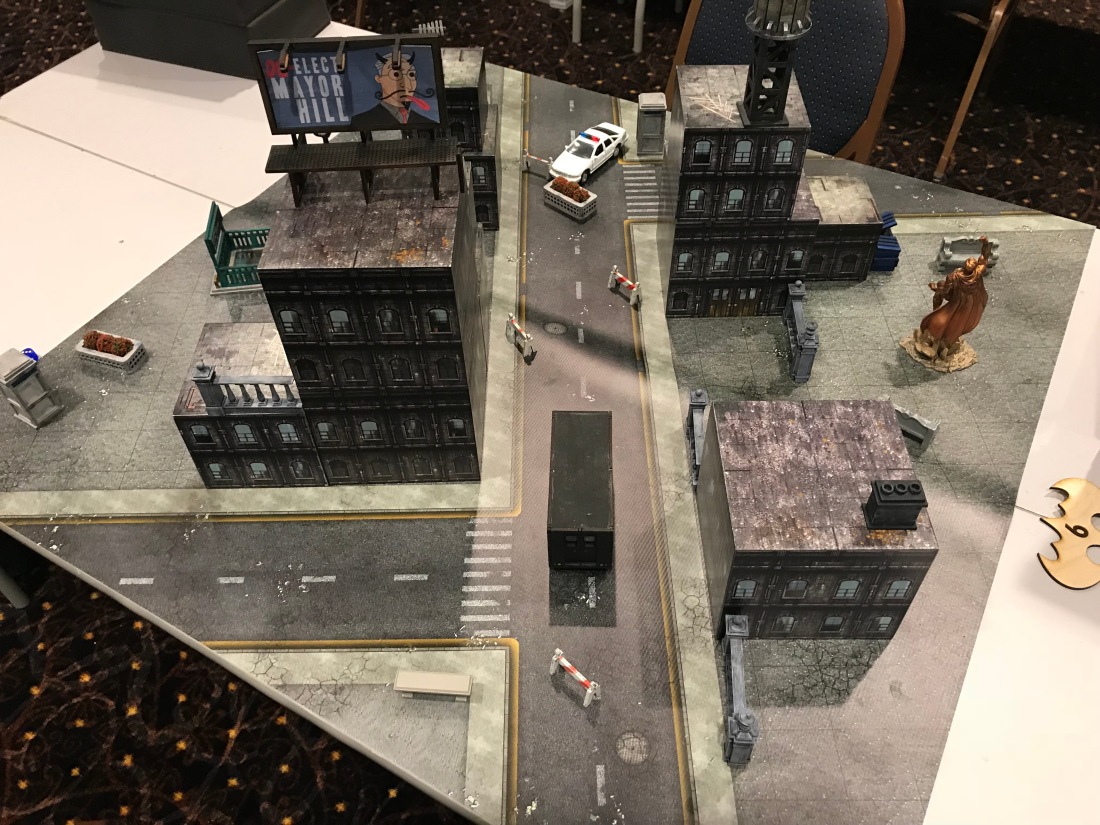 Looking at his lists, I see that no matter what I play against, I’ll be dealing with a lot of Defense 5 and -2 to damage on Goro. Between this and Mind Control on the table, I know I don’t want to drop my heavy henchmen list, so Murder Ball it is. Patrol’s slow ass starts, combined with the fact that Donovan has deployed each of his plants double covering my objectives means that my path to victory will be by killing models, Ivy being the important target. This is by FAR the best and toughest match I had all weekend — we both go into the tank a lot to figure out our way forward, but Donovan ends up teleporting Ivy through the sewers and attempting mind control on both Malcolm and Deathstroke. I fail the Willpower roll on Deathstroke and that pretty much decides the game. Donovan eventually picks off Merlyn, who was a wounded duck most of this game. Ra’s plays defense on Donovan’s objectives, and ends up doing the dirty on Ivy and HSH, but my inability to chew through three Endurance 5 plants means I can’t score easily. I end up taking a minor loss, 12-21.

Didn’t get a photo of this board, which is unfortunate as Chris B created a wonderful secured building setup, with razor wire walls and an enormous building on the left-mid table. The only downside to the board was it essentially created a murder hallway.

I haven’t played my Double Deez Nuts list yet, and it seems like a good drop here, so that’s what we go with. The table we play on is absolutely gorgeous, but because 1 building takes up a quarter to a third of the board, we’re lift with a murder gauntlet in the middle. I fuck up incredibly early by not noticing the positioning of Reaper, and lose Harley on top of 2, which absolutely puts the damper on me turning this match into a win. A giant turn 3 Africa Dog Bomb puts blood on most of his frontline troops, but I struggle to get back to Mesh and his Assault Rifle camping on ammo. Eventually Ra’s gets through, and kills Black Mask and the majority of his list. Willie has to test turn 5 for runaway, but HSH passes the roll. I end up with 277 casualty points in a 42/41 tie. 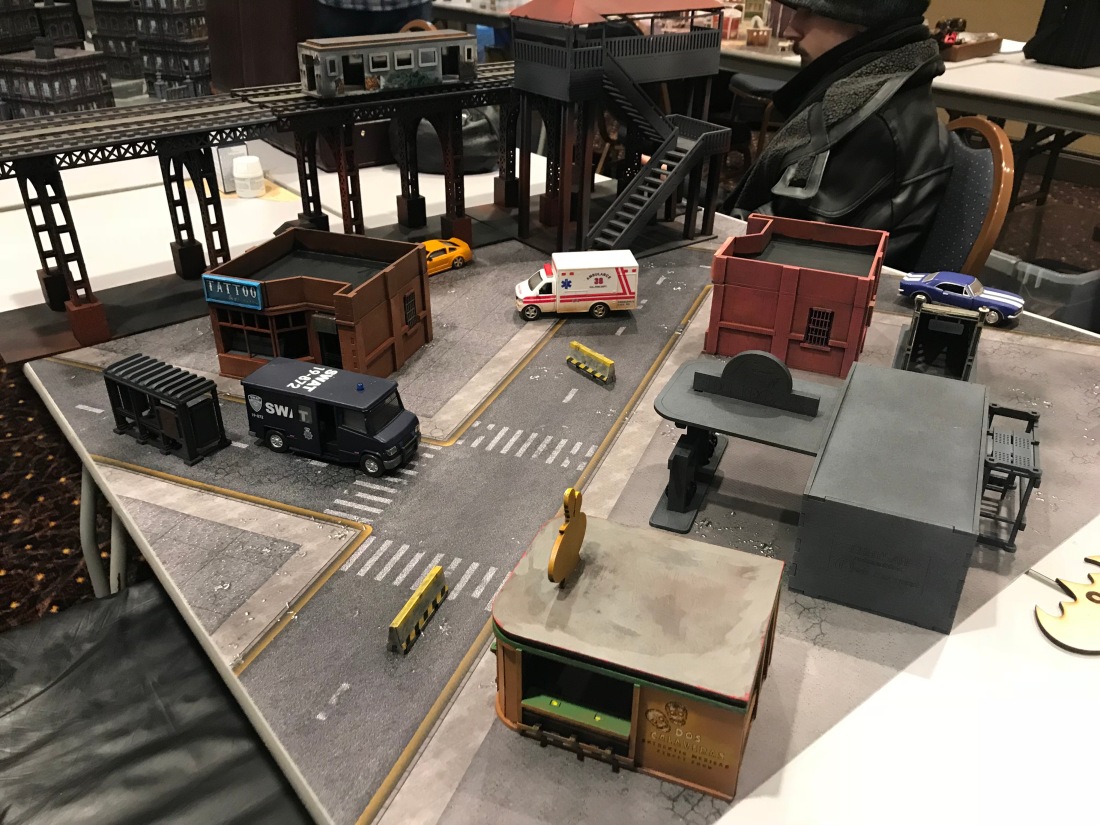 Drew is running Meat Mountain, with most of his list having stupid high Endurance and/or Medium Armor. I know that he’s very susceptible to Disarray, so I drop Double Deez. Between the disarrays and confusion on FA Riddler, I shut off a lot of his ability to get work done, stranding Lex Luthor on top of a building the first 2 turns of the game. He knocks out Riddler with Clayface on turn 2, but the Africa Dogs rush in and drop Clayface to 1 health remaining. Joker raises his gun and Clayface returns to the big art supply store in the sky. Next turn Ra’s makes it into Lex and Deadly Strikes, lopping off that bald bastard’s head. Drew is left with too few models to deal with my beaters and I put this one away 36/17. I end up with 234 casualty points.

So I end up 2-1-1 on the day, with 15 bat match points, a bunch of VP, and over 700 casualty points. Ra’s ends up being worth his weight in gold throughout the day. Overall this is one of the most entertaining tournaments I’ve ever played in, and all of my opponents throughout the day are fucking amazing. I end up 6th overall, placing highest of the podcasters.

Stats on the weekend:

Brave and the Bold players: 8

Brave and the Bold players finishing in top 25%: 0

# of lists with Professor Pyg: 9